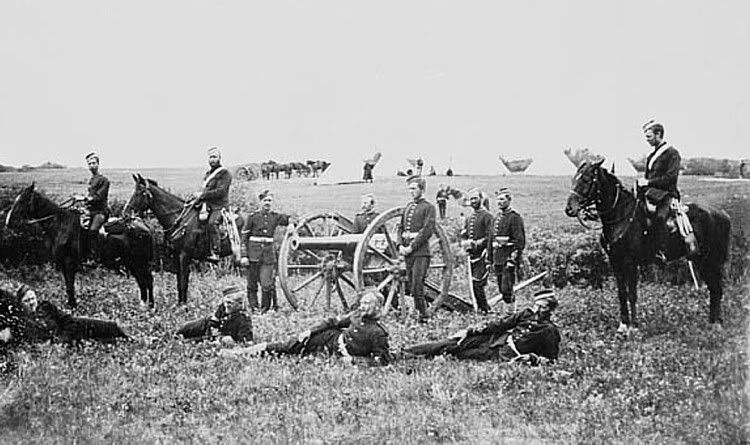 The first major test for Canada’s Gunners came in the North West Rebellion of 1885. In addition to A and B Batteries, many Militia artillery units participated in this action. The Winnipeg Field Battery (later designated the 13th Field Battery) supplied two 9 Pounder (Pdr) Rifled Muzzle-Loading (RML) guns and 49 all ranks. The Montreal Brigade of Garrison Artillery served as infantry on the lines of communication, along with members of the Ottawa Field Battery and Québec and Maritime Garrison Artillery units.

On 27 March 1885, A and B Batteries received orders to proceed west on active service. Under the command of Lieutenant-Colonel C.E. Montizambert, the two batteries left Renfrew, Ontario by rail for Qu’Appelle (now in Saskatchewan). On reaching Qu’Appelle, the two batteries split. A Battery and the Winnipeg Field Battery joined Sir Frederick Middleton’s column. B Battery went west to Swift Current to join Lieutenant-Colonel William D. Otter’s force. In addition to their guns, A and B Battery eventually each manned a Gatling gun and both provided their Garrison Divisions as infantry companies to the force. Lieutenant-Colonel Montizambert commanded all artillery in the force and moved with Middleton’s Column.

A Battery was the first to see action at Fish Creek on 24th April, firing over the heads of the infantry, while elements of the battery fought with distinction in an infantry role. The Battery suffered casualties of 3 killed and 12 wounded in its first action, including Gunner William Cook, who became the first Canadian Gunner killed in action. A Battery and the Winnipeg Field Battery would go on to fight in the battle at Batoche 9-12 May, where the Gatling gun played a crucial role, particularly in helping to save the guns on the first day.

B Battery fought its first battle at Cut Knife on 2 May. Successfully fending off several determined attacks against its guns, Major Short led the Garrison Gunners and NWMP in four counter-attacks against the First Nations warriors. Miraculously, the Battery suffered only 4 wounded during the battle. The Battery experienced extreme difficulties with the 7 Pdr RML guns which they had borrowed from the NWMP (being told that the 9 Pdrs were too heavy to move across the prairie in that area). One of the 7 Pdrs went out of action with a collapsed trail after its first shot. Brevet-Captain (later Major-General) Rutherford rigged the second carriage with rope in an effort to prevent this, but the cannon came loose and had to be lifted back onto its frail carriage after each firing. The Gatling gun was instrumental in holding the enemy warriors away from the gun line. The Battle of Cut Knife marked the first use of the machine gun by Canadian soldiers and the last time in Canadian history that bows and arrows were employed in battle.

Lieutenant-Colonel Strange came out of retirement in Alberta in order to lead the Alberta Field Force as a brevet-Brigadier. Strange’s force was the left column of the three involved in the campaign. His artillery support was a 9 Pdr RML manned by Mounties, all of whom were former members of A or B Battery. Sam Steele took a leave of absence from the NWMP to lead a unit of mounted scouts for General Strange.

In total, the campaign cost The Royal Regiment 6 killed and 18 wounded. The Regular Gunners stayed out west until the summer of 1886 as part of the garrison force. On departing for home, they left their guns with the Mounties in order to strengthen the NWMP presence in the west.