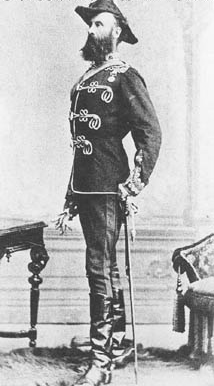 The Father of Canadian Artillery

French’s colleague from the Royal Artillery, Lieutenant-Colonel Thomas Bland Strange (who later rose to the rank of Major-General), was the first Commandant of B Battery Garrison Artillery and the Dominion Inspector of Artillery. Strange, also known as “Gunner Jingo”, is remembered as the “Father of Canadian Artillery”. He was instrumental in forming the Royal Canadian Artillery Association which provided a uniform system of inspection. Participation in nation-wide gunnery competitions, inaugurated by the Association, was shortly extended to meets held in Shoeburyness, England, where Canadian artillery teams became strong competitors for the coveted British awards. These tournaments increased not only the efficiency but also established a magnificent esprit-de-corps in the several independent units, an esprit-de-corps that continues in The Royal Regiment of Canadian Artillery to this day.

His autobiography, Gunner Jingo’s Jubilee, offers a fascinating series of glimpses into the early years of the Regiment’s permanent force component – “When the last British Legionary departed, mine was the task to form its first guard of Canadian Artillery. The evacuation had been so rapid, only a few days elapsed between my arrival and the embarkation of the British garrison, scant time to enlist, arm, uniform and drill the first new guard of the Citadel.” Equipment for the Québec garrison would have been a problem had it not been for Strange’s rather direct manner. The Government of Canada had expected to inherit all the garrison stores but the British Government sold everything down to, and including the bedsteads to local merchants. Strange solved this by not allowing them into the Citadel to get their purchases. The arms, ammunition and uniforms were taken over from the Québec Volunteer Artillery. With drills and practises, Strange quickly brought his garrison into shape. He held his Canadian Gunners in very high regard and the sentiment was eagerly returned.

As Dominion Inspector, Strange visited all artillery units and his inspections were of the most searching nature, as his numerous reports disclose. Strange did not limit his observations to the artillery, but made broad recommendations, including that the Government should found a military college. This recommendation was adopted resulting in the formation of The Royal Military College of Canada (RMC). Upon retirement, he moved to what is now Alberta and became an innovator in large-scale cattle ranching. He came back into Canadian service during the 1885 Rebellion. In recognition of his tremendous contribution to the formative years of our Regiment, Major-General Strange was named first Colonel Commandant shortly before his death in 1925.