The Royal Regiment of Canadian Artillery

A regiment is more than a mere organization; it is in truth a family, with its ancestors and descendants, its pride and its possessions, and through all its vicissitudes, a strong sense of community and continuity – Field Marshal Earl Wavell 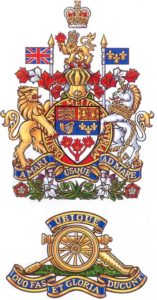 The Royal Regiment of Canadian Artillery (RCA)- also referred to as “The Royal Regiment”, “The Regiment” or “the RCA” – comprises the Regular and Reserve units and personnel of the artillery branch of the Canadian Armed Forces.  It is a potent and vital force multiplier within the spectrum of the Canadian Army’s combat capabilities and has a long and illustrious record of contribution to the success of our Nation’s military endeavours from colonial times to the present – a contribution founded on our ethos of “On Time and On Target”.  At the head of the Regiment are the Sovereign – our Captain General; the Colonel Commandant; and, the Senior Serving Gunner.  Other Senior Regimental Appointments include the Director of Artillery, the Regimental Colonel and the Regimental Sergeant Major RCA.  Honorary Colonels and Honorary Lieutenant-Colonels support Reserve Force artillery units and provide a valued link to local communities as do, for all units and the RCA as a whole, “Friends of the Regiment”.  In keeping with the philosophy, history and customs of the Army’s regimental system, The Royal Regiment is deemed to constitute a family – the Regimental Family.  This family is one which embraces the entirety of serving, former and retired Regular and Reserve Force Gunners as well as their own family members, the members of our associations, affiliated cadet corps, re-enactment groups, foundations and societies.  In the broadest sense, the Family includes all of those who wear or have worn our cap badge, plus the many who support us.  The Regimental Family reflects our Regimental adage: “Once a Gunner Always a Gunner”.  This is a belief shared by our Allied Regiment, the Royal Regiment of Artillery and by other Commonwealth Royal Regiments of Artillery. By virtue of its composition and nature, the family concept plays an indispensable role in promoting the cohesiveness, pride, loyalty, and ésprit de corps of Gunners thus enhancing the moral component of their effectiveness in operations. Finally, it may be said, that in view of its deep historical roots; its intimate involvement with many of the key events of our country’s history; its presence in 33 locales from sea to sea; and, its bilingual character, The Royal Regiment of Canadian Artillery is very much a national institution.

The purpose of this website is to serve as a library of information of enduring value concerning The Royal Regiment of Canadian Artillery.  It is not meant to be a source of current news.  Such information can be found on the Regimental and RCAA Facebook pages and in the Canadian Gunner Newsletter.  Members of the Royal Canadian Artillery Association can log-in on this website to gain access to further information concerning the governance and management of the non-public affairs of the Regiment.  Finally, this site offers an convenient way of donating to the RCA Regimental Fund, the RCA Heritage Fund and to the Royal Canadian Artillery Association.