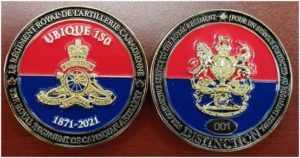 In 1871, the Canadian Government authorized the establishment of A and B Battery as both field artillery units to man Fort Frontenac, Kingston and La Citadelle, Quebec City as well as act as regional schools of artillery to replace the withdrawing British Army. This is a seminal event in our country’s history as it represents the creation of Canada’s first permanent military force, which continues to this day. 2021 marks the 150th anniversary of this event and the RCA Celebration of this historic event will be known as “UBIQUE 150”.

The UBIQUE 150 coin is awarded by RCA Senior Leadership and Command Teams for contributions made to UBIQUE 150 specifically, and or promotion of the Regimental Family as a whole.