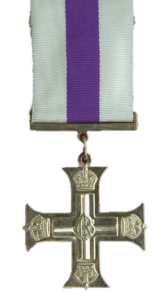 The Military Cross (MC) was established on 28 December 1914 and was awarded to Commissioned Officers of the substantive rank of Captain or below (therefore acting and temporary Majors are eligible) or Warrant Officers for distinguished and commendable services in battle. In 1920, the terms were altered to clearly state the award was for gallant and distinguished services in action and that naval and air force officers could be awarded the cross for gallant and distinguished services on the ground.

Lieutenant William Arthur Ives MC
For conspicuous gallantry and devotion to duty. During the advance this officer constantly submitted information secured under the most trying conditions. He made a personal reconnaissance over the whole divisional front, sending in the first accurate information of the location of the front line. This reconnaissance was made under heavy shell and machine gun fire.