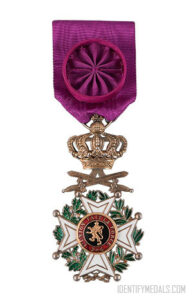 The Order of Leopold is one of the three current Belgian national honorary orders of knighthood. It is the oldest and highest order of Belgium and is named in honour of its founder, King Leopold I. It consists of a military, a maritime and a civil division. The maritime division is only awarded to personnel of the merchant navy, and the military division to military personnel.