The Cross of Saint George (Russian: Георгиевский Крест) is a state decoration of the Russian Federation. It was initially established by Imperial Russia where it was officially known as the Decoration of the Military Order of Saint George between 1807 and 1913. Established in the February 1807 decree of Emperor Alexander I, it was intended as a reward for “undaunted courage” by the lower ranks (soldiers, sailors and NCOs) of the military.

The Cross of Saint George was reinstated into the Russian awards system in 1992. It is awarded to soldiers, sailors, sergeants, petty officers, warrant officers and junior officers for deeds and distinction in battle in defence of the Fatherland, as well as for deeds and distinction in battle on the territory of other states while maintaining or restoring international peace and security with recognized instances of courage, dedication and military skill. Awarded sequentially in four classes from the fourth to the first for subsequent acts of courage. 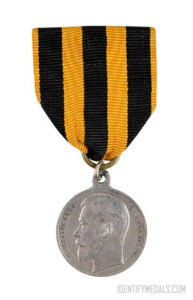 The St. George Medal came in four classes. Gold medallions for 1st and 2nd class (shown above). Silver medallions for 3rd and 4th. A bow on the ribbon denoted 1st class and 3rd. The medal was awarded for merit to other Allied soldiers as well as Russians.