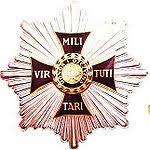 Since 1989 there have been no new awards of the Virtuti Militari, and a new act of parliament introduced a rule setting the final deadline for awards at “no later than five years after the cessation of hostilities.” In wartime, the President of the Republic of Poland could award the OWVM for heroism in battle