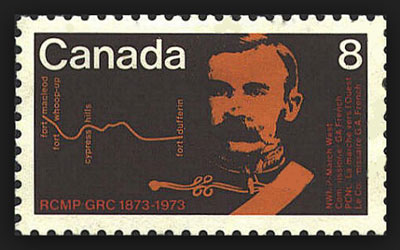 To control the North West Territory and prevent American encroachment, Prime Minister Sir John A. MacDonald had a constabulary formed in 1873. Originally to be named the North West Mounted Rifles, MacDonald insisted that while equipped for war, the unit should be called the North West Mounted Police (NWMP) to avoid provoking the United States. The first 150 men of the NWMP were enlisted at Lower Fort Garry in 1873 under the Military District Commander of Manitoba.

In 1874 the NWMP were reinforced and concentrated at Fort Dufferin (now Emerson, Manitoba). From there, they began their great march west in July, leaving the Province of Manitoba to bring law and order to the Territories and to secure Canadian sovereignty. The Mounties eventually extended their policing duties across the entire country.

The First Commissioner of the NWMP was Lieutenant-Colonel (later Major-General) Sir George A. French, a Royal Artillery officer who had been seconded as the first Commandant of A Battery Garrison Artillery. The first Chief Constable (RSM) was Staff Sergeant Arthur Griesbach, also of A Battery. Together with 31 other men from A and B Battery, they formed the nucleus of the new police force. The Gunner contribution included 15 Non-Commissioned Officers, among them Sgt Sam Steele (later Major-General Sir Sam Steele) from A Battery. Steel was one of three Gunner NCOs appointed to the five Troop Sergeant Major positions within the force.