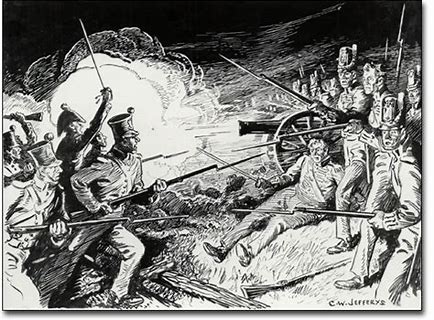 The Royal Artillery presence in Canada dates from at least 1745 when a train of the Royal Artillery was stationed in Louisbourg after its capture in that year. The Royal Artillery played a prominent part in the battles with the French for control of the country.  From 1760 until 1855, the defence of Canada rested mainly with the British regulars garrisoned here, and like the French, the British also had to rely on Canadian assistance.  All Canadian men between 16 and 60 were liable to be called up for military service in an emergency.  As a result Canadian-born men of both British and French descent saw service with the British forces in the American Revolution 1775-1783, the War of 1812 and the rebellions of 1837-38.

The British principally used garrison artillery to bolster the defences of settlements rather than field artillery with mobile forces. In addition to Royal Artillery units serving tours in Canada, the British also formed volunteer militia artillery companies in settlements to augment their defences, particularly along the Atlantic coast in the 1790’s.

As the direct threats to the colonies in North America diminished from the mid-1800’s, the British government sought to reduce the expense of defending the empire. To this end, the Dominions (colonies with home rule but no power for foreign affairs) were encouraged to provide for their own defence.