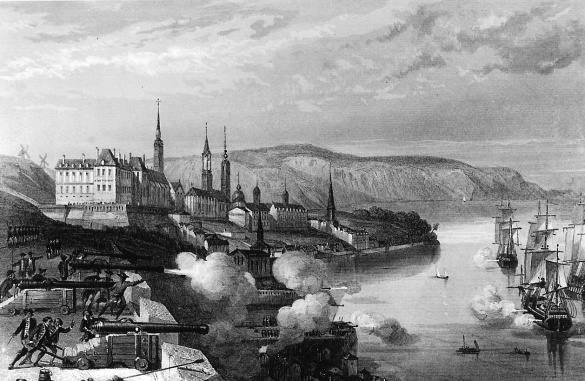 The first recorded use of artillery in Canada occurred in 1534, when Jacques Cartier had two guns on his ship fired in order to scare off First Nations warriors approaching in canoes. On his third visit in 1541, Cartier brought three guns ashore from his ships to protect the log fort at Charlesbourg-Royal, a pattern copied by colonists for the next two hundred years.  In spite of significant fighting between French colonists and the First Nations people, particularly the Iroquois confederacy, the French Crown provided no regular soldiers in Canada until 1665. The settlers had to see to their own defences. As early as 1636 there is a record of “The Company of One Hundred Associates” being organized for defence against the First Nations. This company procured some artillery pieces from ships that arrived in the colony.

The arrival of French regular troops in 1665 turned the tide of the war with the Iroquois and secured New France from destruction at their hands, however, the threat posed by the English did not abate. Even with regular troops, gunnery remained largely the business of the French settlers under the guidance of infantry soldiers. Guns were not prominent in warfare against the First Nations because of their lack of mobility in a country possessing few and poor roads. Instead guns were mainly found in a garrison role defending population centres.

A notable example of such a defence took place at Québec in 1690. There, the colonists manned gun batteries under the direction of Jacques Le Moyne, a Canadian-born officer. They did good service in repulsing the English attack on the city under Sir William Phipps. The French commander, “le compte de Frontenac”, famously replied to the initial English demand to surrender with the words: “I will answer your General only by the mouths of my cannons….”

In order to provide for a permanent garrison of regular troops, the French Crown established the “troupes de la marine” in New France in 1692. Service in these “colony regulars” must have attracted many Canadians because in 1743 the King wanted to discourage recruiting in Canada since it withdrew too many men from agriculture. The first company of regular French Gunners was created in Canada in 1750, when Louis XV ordered a company formed within the “troupes de la marine”. A second company was added in 1756. The Gunners were considered to be the elite of the force, and were the first recorded artillery units accorded the honour of the right of the line on parade, a tradition copied by the Royal Artillery some six years later. Canadian-born men had served in the military forces and colonial defences of New France for some two centuries by the time of the formal capitulation of the colony to the British in 1763.