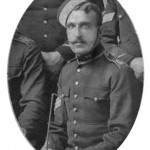 Master Gunner James Maher, the son of a Trumpet-Major in the Royal Horse Artillery, was born in the Parish of Portobello, near Dublin, Ireland, on 13 August 1839.

Exposed to the ways of army life as a child, he enlisted in the Royal Artillery at Woolwich on 8 November 1852. His initial documentation records him as “Age – 13 years, 3 months; Size – 4 feet 9-1/4 inches”, with a sallow complexion, brown eyes and dark brown hair. His father, who had recently retired, provided him with the regulation kit, thereby saving young James a considerable personal expense.

His first few years in Woolwich were busy; he had much to learn of the gunner’s art. He saw his first foreign service in the Crimea from September 1855 until July 1856. He returned to Leith Fort, England, where, after one year he was promoted to Bombardier; one more year was to see him promoted once again, this time to the rank of Corporal. By the spring of 1861 he was serving at Portsmouth in the rank of Sergeant and on New Year’s Day 1862 he departed Liverpool bound for service in North America.

During the next five years he would serve at Saint John, Fredericton, Montreal and Kingston. While in the latter city he was to form an attachment to the New World that would profoundly affect his life and eventually drew him back to Canada. On 3 March 1867 he married his wife Susan, and in mid-November that same year his daughter Isabella was born.

Departing Montreal for Malta in 1868, he was appointed Battery Sergeant-Major on arrival; he would remain on this Mediterranean island for six years.

Returning to England in 1874 he served at a number of locations including Plymouth and Dover. On taking up his position at this latter city on 7 March 1877, he assumed the appointment of Brigade Sergeant-Major. Then, after serving 28 years with the Royal Artillery, he retired and in 1880 returned with his family to Kingston.

He soon enrolled in A Battery, Royal Canadian Artillery (RCA) where his vast experience and technical skills were welcomed. When A Battery moved to Quebec City in late 1880, he replaced Master Gunner George Creegan who elected to remain at Kingston. Master Gunner Maher was to serve with A Battery for the next 18 years, including seeing action in the Northwest Rebellion of 1885. Here he developed a life-long friendship with Major General R.W. Rutherford. He retired to pension in 1898. The value of his service was recognized with Meritorious Service Medals of both the British and Canadian forces.

In retirement, the Master Gunner remained very active in Canadian Gunner affairs. He worked an additional 18 years in the offices of the Director of Artillery at Militia Headquarters, Ottawa, finally retiring at age 78 after more than 64 years service to the guns. His long and distinguished service stands as a unique accomplishment.

One of Canada’s first Master Gunners, James Maher’s lifetime of good work with the guns and for Canada are a superb example which would be difficult to duplicate.