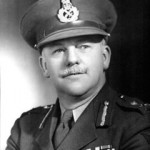 One of The Royal Regiment’s brilliant technical proponents, Major-General Harold Oswald Neville Brownfield was born at Englewood, New Jersey, in December 1894, was educated in Kingston, Ontario, and subsequently attended the Royal Military College. On graduation in 1910, he was employed as an instructor with The Royal Canadian Horse Artillery and The Royal School of Artillery in Kingston.

As a Lieutenant he served in France from 1916 until the armistice and was awarded the Military Cross for gallantry. His coolness and courage in directing the care of the wounded while under a heavy high explosive and gas barrage, as well as his maintenance of an observation post while under constant machine gun fire were noted in his citation. “Brownie”, as he was affectionately known, was mentioned frequently for his skill and courage when it really mattered.

After serving in Kingston and Winnipeg, he was nominated to attend the Imperial Staff College and on graduation in 1934 was appointed Professor of Tactics at the Royal Military College. At the outbreak of the Second World War he was a General Staff Officer at Military District Number 7 in Saint John, New Brunswick. He proceeded overseas as Brigade Major, Royal Artillery, 1st Canadian Infantry Division. Promotion soon followed and with it the appointment to command the 8th Field Regiment.

Due to his proven abilities and his experience overseas, he was returned to Canada in 1940 and was promoted to fill the Commander, Royal Artillery appointment in the newly formed 3rd Division. The following summer he sailed with the Division for the United Kingdom.

In November 1941, he was appointed Commander Corps, Royal Artillery at 1st Canadian Corps and served both in England and in Italy before assuming the appointment of Brigadier, Royal Artillery of the First Canadian Army from November 1943 until January 1945. In the latter stages of the war he commanded “C” Group, the artillery component of the Canadian Reinforcement Units in the United Kingdom. His work in coordinating all artillery matters was widely acclaimed. His dedication, efficiency and forceful, positive personality, became his hallmark. Among his many achievements were the conception and establishment of the Canadian Army School of Artillery (Overseas), the development and fielding of the Land Service Mattress (1 Canadian Rocket Battery) and the training of the artillery units supporting Operation OVERLORD. His work was recognized in his appointment to the grade of Commander of The Most Excellent Order of the British Empire.

On return to Canada in 1945 he commanded Prairie Command; one year later he was appointed Commander Canadian Joint Staff in Washington and promoted to Major-General. He retired to pension in 1947.

Major-General Brownfield honoured The Royal Regiment by accepting the position of Colonel Commandant in 1948; he served The Royal Regiment in this capacity for ten years. During his tenure he visited most Canadian Gunner units, making frequent gifts of Regimental plate and trophies. It was said that he knew more Canadian gunners than any other artillery officer.

His long career was characterized by professionalism, innovative ideas and a genuine feeling for the men of The Royal Regiment. In large measure he is responsible for the accomplishments of Canada’s modern gunners.