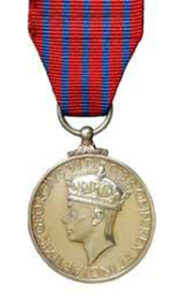 The George Medal (post-nominals: GM) was established on 24 September 1940. It was awarded only for acts of great bravery and was intended primarily for civilians. Awards to the military were confined to actions for which purely military honours were not normally granted.

Gunner Jack Chambers GM
The King has been graciously pleased to approve the award of the George Medal, in recognition of conspicuous gallantry in carrying out hazardous work in a very brave manner. At the Junction of Courts Downs Road and Wickham Road, Beckenham, during an enemy air attack on the night of the 16th/17th April, 1941, Gunner Chambers, with absolute disregard for his own personal safety, rendered invaluable assistance in the rescue of Auxiliary Fire Service personnel.
A trailer pump in charge of a leading fireman was proceeding to assist in fighting a fire when a high explosive bomb fell about 20 feet from the vehicle; the petrol tank was pierced and a blaze started. Gunner Chambers, in spite of the blazing petrol, assisted a fireman to rescue another fireman. They subsequently made gallant efforts to rescue another fireman from the blazing vehicle, but their efforts were foiled by the tremendous heat.

Lieutenant Walter Douglas Elsdon GM
Lieutenant Walter Douglas Elsdon, 2nd Canadian Field Regiment, RCA, was in charge of captured enemy equipment at Nieuwsluis Zuid-Holland, map reference 582699. At 1550 hours on 20 May 1945 a vehicle full of German high explosive ammunition and incendiary mortar bombs was being unloaded. An explosion of undetermined origin occurred, killing five soldiers and two civilians and wounding two soldiers and four civilians. The vehicle was completely wrecked and its load of high explosive rounds and mortar bombs had, in exploding and burning, set fire to a further stack of ammunition and bombs. Burning liquid was spreading rapidly, causing fires from which some of the injured men were unable to evacuate themselves. Although in great danger from the exploding ammunition and flaming liquid, and although his observation was severely hampered by dense smoke, Lieutenant Elsdon rushed into the centre of the fire and carried the most seriously injured men to safety. Inspired by this example, his men aided the remainder of the wounded to get clear of the fire. Lieutenant Elsdon returned to the fire and again at great risk ensured that all the injured men had been removed. Only when he had done this and ensured there were no casualties near the vehicle did ne withdraw. Lieutenant Elsdon then arranged for the evacuations of the casualties. He again returned to the proximity of the exploding, burning mass and by personal searching cleared all troops and civilians from a farmhouse and canal boat located fifty yards from the fire. He ordered all personnel to withdraw to a safe distance and posted picquets. Soon after this, the farmhouse was demolished by the force of the increasing explosions. In all thirteen thousand mortar bombs and seven thousand high explosive rounds were destroyed.
Throughout the incident, Lieutenant Elsdon gave an inspiring example for his men to follow, and displayed unhesitating courage and a coolness of mind which saved the life of one man and undoubtedly further casualties to his men and civilians.

Major Douglas Scott Harkness GM
Awarded the George Medal in 1943 for the part he played in the orderly abandonment of a troopship which was torpedoed on her way fromEngland to Sicily with vehicles, stores and personnel for the Sicilian campaign. With the ship on fire and ammunition exploding, Col. Harkness (in the words of the citation) “descended to the mess deck and, exhibiting courage, gallantry and devotion to duty of a high order, succeeded in rescuing men from the flames and pulling them to the main
deck.” Three minutes before the ship sank, Col. Harkness and another soldier rescued the last two men on board the ship, who were hysterical and had to be thrown bodily overboard.