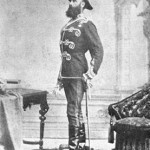 The second son of a Scots officer, Thomas Bland Strange was born in Meerut, India, on 15 September 1831 and educated at Edinburgh Academy. Unable, for financial reasons, to follow his brother to Sandhurst, young Tom was accepted the Royal Military Academy, Woolwich. Here talent and performance were more important than good breeding. He graduated at age 20, was commissioned in the Royal Artillery and posted to Gibraltar.

He devoted a large measure of his life to his physical and intellectual development. A tall, imposing figure with a remarkable physique, a commanding voice and for much of his life, a full flowing beard, he placed great importance on the hardening and welfare of his troops.

Promoted Lieutenant in November 1853, he was posted Jamaica where he contracted yellow fever. Later transferred to the hospitable Bahamas, he busied himself at improving Nassau’s defences. In 1856 he was ordered to the Crimea, however, before he reached England, the war was over.

One year later he was dispatched to India to assist in quelling the mutiny of the Bengal Army. He soon demonstrated his characteristic daring and determination; he was Mentioned-in-Dispatches on four occasions. He remained in the Punjab where he delighted in finding novel ways to train his soldiers. He disagreed with his superior concerning the pay of his soldiers and, while ultimately upheld morally and legally, found his tenure increasingly difficult. Prior to returning to England in 1864 and while recovering from a second bout of fever, he made a six-month trek from Tibet to Kashmir, revelling in the physical hardship.

After promotion to Captain and a brief service in Ireland, he was appointed to the Instructional Staff at Woolwich. Subsequently tasked to train the Volunteer Artillery, he again ran afoul of the system, publicly condemning the substandard equipment. He was disciplined, an occurrence which likely precipitated his move to Canada in 1872.

He was appointed Inspector of Artillery and Warlike Stores for Canada and to command of “B” Battery. His relief of the departing British troops was true to form; his direct and uncompromising manner caused no little discomfiture to the departing officers, et gained much needed equipment for the garrison. He was accepted immediately by the citizens of Quebec; his fluency in French and his involvement in the social and sporting activities of the community earned their respect and approval.

In his 1873 report he recommended the establishment of three important Canadian institutions: the Royal Military College, the Dominion Artillery Association and the Dominion Cartridge Factory. In varying form all three exist today. He also recommended that the west coast defence be based on a four battery Brigade of Garrison Artillery; this too was acted upon.

After eight years in his beloved Quebec, Lieutenant-Colonel Strange was moved to Kingston where he also became a prominent member of the community. Then, at age 51 and promotion to Colonel, he was advised that he would be forced to retire with the Honourary rank of Major-General. His bitterness at forced retirement was eased in small measures when his gunners, the first Canadian Team to compete at Shoeburyness, England, returned home with the Governor General’s Prize.

General Strange moved to Alberta, purchased a large tract of land and established a ranch. In the spring of 1885 and the outbreak of the North West Rebellion, Big Tom Strange, as he was known locally, was asked to organize the defence of the Alberta District. The Alberta Field Force, composed of cowboys, Mounted Police and three untested Militia battalions acquitted themselves well, particularly in the engagement at Frenchman Butte.

He returned to his ranch and while working, was kicked by a horse; his recovery was never complete. To add insult to injury, he was informed by the British War Office that, as he had returned to service with the Canadian Militia, his pension was cut off. After a short abortive attempt at politics, he sold the ranch and returned to England. He remained active until his death at Camberly on 9 July 1925.

The contribution made by General Strange is epic in proportion. On his retirement, Major-General R.G.A. Luard, Major-General commanding the Militia noted that more than 2,700 officers and men had served with Tom Strange during the time he commanded “B” Battery, and referred to him as “a father to the Artillery of Canada”.

We could do no better.