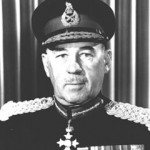 A native of Toronto, Major General Hebert Alan Sparling received his early education at Ottawa and Saint John, New Brunswick. He entered the Royal Military College in the summer of 1925 and graduated four years later with the nickname “Sparky” as his brother had before him.

Upon graduation he was commissioned a Lieutenant and posted to “B” Battery, Royal Canadian Horse Artillery (RCHA) in Kingston, where he served in a variety of appointments. From October 1932 until August 1933 he attended the Artillery Staff Course (Canada) and subsequently undertook the United Kingdom’s year-long Gunnery Staff Course and, on its completion in November 1934, was appointed Instructor-in-Gunnery at the Royal Canadian School of Artillery in Kingston; in March 1935 he was appointed to similar duties in Winnipeg where he served until the spring of 1938. His attendance at the Camberley Staff College in January 1939 was preceded by a short term of service as a 3rd Grade Staff Officer in the Directorate of Military Operations and Intelligence. The Camberley Staff College course was abruptly terminated on 3 September 1939 when Great Britain declared war on Germany.

Returning immediately to Canada, he served briefly in the Adjutant General’s Branch and on promotion to Major, for several months in the Directorate of Military Training and Staff Duties; in April 1940 he was appointed Brigade Major, Royal Artillery at the artillery headquarters of the 2nd Canadian Division. He embarked with the Division in August and continued to serve there until promoted to Lieutenant-Colonel in May 1941.

Once again returning to Canada he was appointed to the Directorate of Military Training in Ottawa until his return overseas in September 1942. The following month he was given command of the 13th Field Regiment, a post he held until May 1943. A rapid series of appointments followed: General Staff Officer on the staff of the Brigadier, Royal Artillery with attachment to 21 Army Group Mission in North Africa, attachment to the staff of the Brigadier Royal Artillery, Headquarters 8th Army for the assault on Italy, observer to the 1st Canadian Tank Brigade in Sicily, called back to the United Kingdom to report on the operations in Sicily, observer to Headquarters 8th Army and briefly in the same capacity to Headquarters 13 British Corps in Italy. He was recalled to the United Kingdom in October 1943.

On arrival in England he was promoted Brigadier and appointed Commander Royal Artillery, 3rd Canadian Infantry Division; in December he returned to Italy to assume the same appointment with the 5th Canadian Armoured Division, serving there until December 1944. He then transferred to Headquarters 1st Canadian Corps in Italy and was appointed Commander Corps Royal Artillery, a post he held both there and in North-West Europe until after VE Day. In June 1945 he returned to Canada to command the 6th Canadian Infantry Division Artillery, then forming for service in the Pacific Theatre. Following the surrender of Japan he returned to Europe as Commander Royal Artillery, 3rd Canadian Infantry Division, Canadian Army Occupation Force in Germany.
In May 1946 with the 3rd Division’s return to Canada, he was appointed District Officer Commanding, Military District Number 2, headquartered in Toronto.

The following year on the reorganization of the Army, he assumed the appointment of Officer-in-Charge Administration at Headquarters Central Command. The summer of 1947 brought him command of Western Ontario Area. In July 1949 he again returned to Army Headquarters to serve as Deputy Chief of the General Staff. The following year he attended the one-year course at the Imperial Defence College and in November of that year was called back to Canada, promoted to Major-General and assumed the duties of Vice-Chief of the General Staff.

In December 1955 he was transferred to Washington to fill the dual appointments of Chairman, Canadian Joint Staff and Canadian Representative to the Permanent Military Committee of the North Atlantic Treaty Organization. In September 1958 he returned home to become General Officer Commanding Central Command. In June 1962 Major-General Sparling commenced retirement leave and retired to pension early the following year.

Active in retirement, he worked as a member of the Ontario Police Commission for 16 years. For 10 of these years he also was Executive Officer of the Toronto Redevelopment Advisory Council, a voluntary group advising on Toronto’s downtown development. Maintaining his close association with The Royal Regiment, he chaired the Royal Canadian Artillery Association’s History Committee, guiding the production of the definitive two volume Regimental history, The Gunners of Canada. In January 1969 he accepted the appointment of Colonel Commandant of The Royal Regiment of Canadian Artillery, a role he enthusiastically undertook until early 1975.

Major-General Sparling was a Commander of the Most Excellent Order of the British Empire, a Companion of the Distinguished Service Order, was Mentioned-in-Despatches and was appointed to the United States of America Legion of Merit in the Grade of Officer.