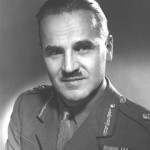 Major-General Alfred Ernest Walford was born in Montreal on 20 August 1896 and received his education at Westmount, Quebec. Initially employed as an accountant with the family firm, he later accepted a position as financial advisor and secretary-treasurer to the firm of James A. Ogilvie and Sons of Montreal.

In September 1914, he enrolled in the local unit, the 58th Westmount Rifles and served as a signaller. One year later he enlisted in the 3rd Canadian Siege Battery of the Canadian Expeditionary Force and went overseas in December 1915. In June 1916 the battery, (often referred to as “Cape’s Battery” after it’s first commander), was in action at the Somme. Here, as a Corporal with the 12th Canadian Siege Battery, he was awarded the Military Medal for bravery in the field, subsequently gained promotion to Warrant Officer Class II and was commissioned. He continued to serve with the 12th until the Armistice.

On return to Montreal he continued to serve in the Non-Permanent Active Militia as Battery Commander of 7th Medium Battery from 1927 until 1934. On promotion to Lieutenant Colonel, he commanded 2nd Medium Brigade until the outbreak of the Second World War. He was immediately appointed Deputy Assistant Adjutant General of 1st Canadian Infantry Division and in December 1939, he once again went overseas.

While in the United Kingdom he served as Assistant Adjutant and Quartermaster General (AA & QMG) with the 1st Division and on promotion to Brigadier, in a similar capacity at Canadian Corps Headquarters. Later, when the First Canadian Army was in training preparing for the invasion of Europe, its commander selected Brigadier Walford for his headquarters staff; for his work in the Normandy campaign he was Mentioned-in-Dispatches. In the fall of 1944, he gained the rank of Major-General and was appointed Adjutant General.

The fall of 1944 brought appointment as Commander of the Order of the British Empire and early the following year the award of the Legion of Merit by the United States. Prior to his retirement in early 1946, Major-General Walford was appointed to the Most Honourable Order of the Bath.

Returning to the world of business, Major-General Walford headed Henry Morgan Company Limited of Montreal, a large conglomerate with interests in finance and real estate. In 1947, he accepted the appointment of Honorary Colonel of Headquarters 3rd Canadian Division.

An active leader in his community, he held a number of positions: Governor of McMaster University, Treasurer of the Montreal Board of Trade and Commissioner of the Montreal Metropolitan Area Boy Scouts. He became the first Canadian President of the Federation of Commonwealth and British Chambers of Commerce.

Major-General Walford died at age 94 in Montreal after a life of service to his country and to his Regiment.