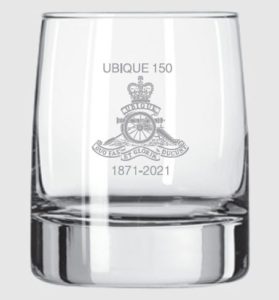 Available in selected stores and online at Canex.

The perfect accessory for your UBIQUE 150 themed beverage station! 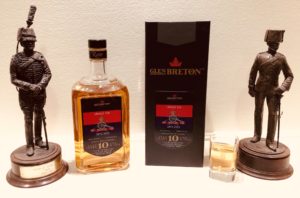 The RCA Association is proud to announce a special commemorative edition of 10 year old Whisky, produced by Glenora Distillers in Nova Scotia.  Orders can be placed at the Glen Breton website.

In 1871, most British troops in Canada were withdrawn. “A” and “B” Batteries were formed to take their place in manning the fortifications at Kingston and Quebec and as schools of gunnery for the Active Militia – symbolizing in both roles Canada’s new responsibility for its own defence.

150 years later, The Royal Regiment of Canadian Artillery, comprises 25 units represented in 33 towns and cities from Victoria to Yarmouth. Its more than 4000 members, Regular and Reservist alike, continue to serve proudly at home and abroad, in keeping with its motto, “UBIQUE” – “everywhere”, and mindful of the of legacy of those Gunners who have gone before.

Since 1876, The Royal Canadian Artillery Association has promoted the effectiveness and welfare of The Royal Regiment of Canadian Artillery and of all matters pertaining to the defence of Canada. UBIQUE 150 is an opportunity for us to strengthen the bonds of our Regimental Family, promote our contribution to the success of the Army, and increase Canadians’ awareness of our presence in their communities while expressing pride in who we are and what we do as Gunners.

Read our story at here 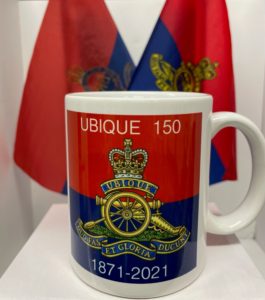 Available for a limited time only, this mug can be purchased exclusively from the RCA Kitshop. 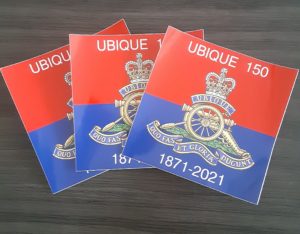 Available in the members’ only portal.

Or at the RCA Kitshop.

*Quantities of these stickers are being shipped directly to the units for all serving members. 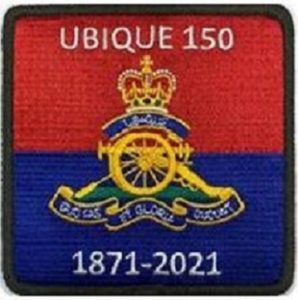 Serving members* are invited to wear the UBIQUE 150 sleeve patch.  Items will be available for purchase at Canex stores.  **Temporarily out of stock

As part of the Regiment’s commemoration programme, UBIQUE 150, the Commander of the Canadian Army has approved all ranks of The Royal Regiment of Canadian Artillery, including gunners posted to extra-regimental employment positions, to wear the UBIQUE 150 patch on the No. 5B Operational Dress (CADPAT). In order to avoid confusion and recognize the indispensable role of non-artillery members of The Royal Regiment in allowing us to shoot, move and communicate, it should be understood that all personnel in units of The Royal Regiment, regardless of trade, are welcome to wear the patch. The patch will be worn during the UBIQUE 150 commemorative period from 1 April to 4 December 2021 on the left sleeve below the Canadian Flag.

These patches are an optional dress item, though all Gunners are strongly encouraged to wear it with pride. As with other Canadian Army CADPAT patches, CANEX has been selected as the provider and will be offered for sale in both the retail stores and online at CANEX.ca in the near future. The patches may be purchased by individuals, or if desired, units may purchase them using their Non-Public Funds at which time soldiers will be expected to wear them under CO’s direction.

*This Patch is available for purchase to the general public from Canex. Nothing precludes them from wearing them in a respectful manner.